The Hero, the widow and the Army Pensions Board published 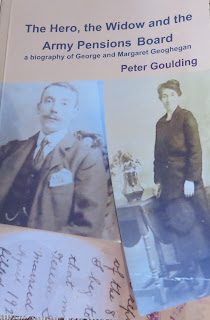 This is the story of George and Margaret Geoghegan, an ordinary couple caught up in the most momentous week of Irish history. George achieved some sort of fame in the family for getting himself killed early on in the fighting of Easter Week. His widow spent eight years battling the Army Pensions Board to be treated "the same as the other widows." 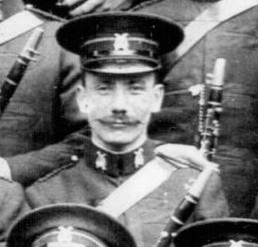 This is not a heroic book. There are no poignant poems or writings. They were not well-known. Because of this, piecing together their story has been quite painstaking. There are gaps and conjectures, assumptions and riddles. But an overall picture does start to emerge of the life and times of George and Margaret.

The book will mainly be of interest to the 260+ descendants of George and Margaret. There is a fair amount of genealogical information on the Geoghegan and Ledwidge families and an appendix which attempts to list all those descendants.
I hasten to add that anybody expecting a highly professional, polished biography will be sorely disappointed. I am not a professional writer and this is my first biography. I have proof-read the book myself and found mistakes at every reading, to such an extent that eventually I had to say 'Enough!' or the book would never see the light of day. As such, small errors may occur for which I apologise in advance. Hopefully they are errors of style and grammar and not errors of fact!
This book is written for the descendants of George and Margaret, for my wife, children and grandchildren. As such, it is being sold at cost price and is not intended to cash in on the impending centenary of the Rising. I prefer to see it as a memento, a family keepsake. If nothing else, it may help to bring a few of those old sepia photographs to life.


Posted by Peter Goulding at 12:19 PM No comments:

Peter Goulding
I work in a warehouse which as you can imagine is very stimulating. I follow Shelbourne FC and football in general. Happily married for over 20 years to Monica with two great no-longer kids, Louise and Neil. I mainly write humorous verse but have written serious verse, a book of essays, a novel and a biography. But still can't put up a shelf.